I’ve got a mechanical engineering background from the University of Wisconsin. I’ve actually worked in the electrical business for the last 25 years, 15-years of general industry and 10-years in the oilfield, specifically in automation.

My engineering background, mechanical engineering, gives me a little different understanding of how pump curves work. So, I’m going to try to walk you through why, while a soft start is less expensive the idea of saving a little bit of money is very appealing right now, you should consider a drive on your centrifugal pump regardless. We’re going to look at a typical example and I hope the pump curves and the technical pieces we’re going to show you aren’t too scary. 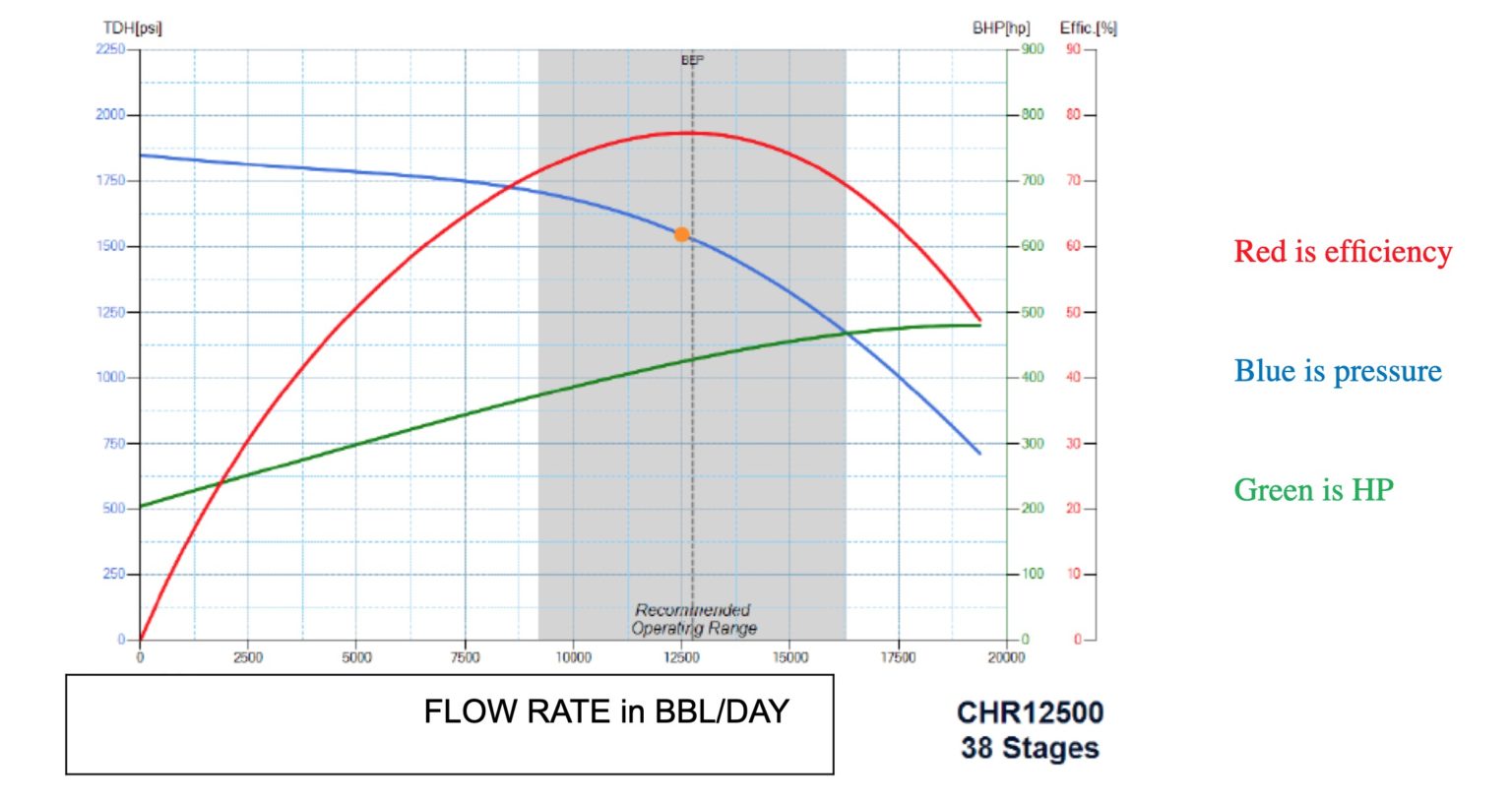 What we have here is a pump curve for a pump that is designed to flow about 12,500 barrels a day of fluid into about 1500 psi of pressure. That’s the best operating point that is available; the best efficiency point. There are a few things on this curve that we’ll want to consider.

Many people mistakenly think that when we increase the pressure into the pump, we’re going to see a horsepower increase. And that’s not really true. Horsepower, as you can see, really correlates more to flow. As flow goes up, horsepower requirement goes up. You should note that this pump is designed to produce about 12,500 barrels a day into 1500 psi. That’s a design point. That’s not the most it might ever see and it’s certainly not the least it might ever see.

During a new-well construction, we might see pressure as low as zero. We could see it at many, many points. And we traditionally see those pressures go up as time goes on, which means we’re working the pump differently on day 400, then we are on day one. The benefit of using a drive is that we can take advantage of the many, many different curves that are available. 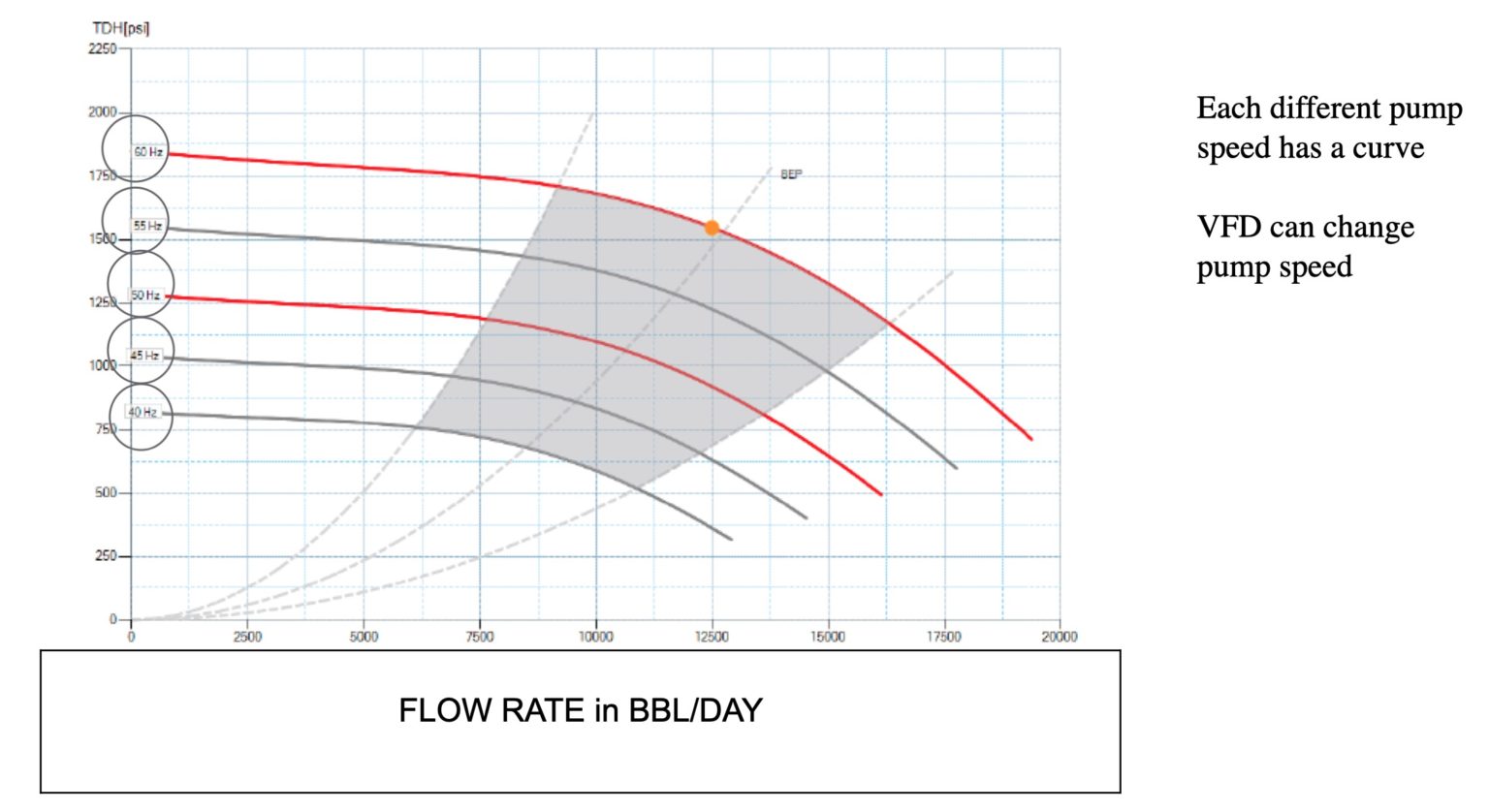 If we put a soft start on this because we bought a less expensive control mechanism, we’d only be able to run at 60 hertz. That’s the normal speed of the motor. However, by using a drive, we can run at any point between 0 and 60, most commonly between 50 and 60 on horizontal pumps. But we could run slower in the beginning. This helps us save money on energy.

Here’s our full-speed pump curve. This is if we had a soft start running the motor full speed, we’d be able to produce 12,750 barrels per day at the best efficiency point at 1528 psi of head pressure. That would consume about 420 horsepower. So for every one of our horsepower, we’re able to flow about 29 barrels per day.

Well, let’s say we don’t actually have 1528 psi of pressure on the backside of the pump yet. Let’s say the well is still new and we have less pressure in the formation. Instead of having to put a back-pressure valve on to keep the pump on curve, we could actually slow it down. So, we could run as low as 1192 which is the best efficiency point for 53-hertz. We could still float 11,062 barrels a day. But instead of only getting 29 barrels per day, per horsepower, we would produce 38 barrels per day, per horsepower. A nice increase in efficiency.

The difference between 29 horsepower and 38 is actually a 24% gain of efficiency. And in both scenarios, we’re operating at the best efficiency point. That would get us a savings of $50,000 a year at 10-cents-per-kilowatt-hour. The payback on the drive at this point is really only a few months.

I hope this helps you understand why, although a drive may seem to cost more on the front-end compared to a soft start, it actually saves you a lot of money very, very quickly. Over a four- or five-year period, you’ll be looking at $225,000 to $230,000 savings. Thank you very much.